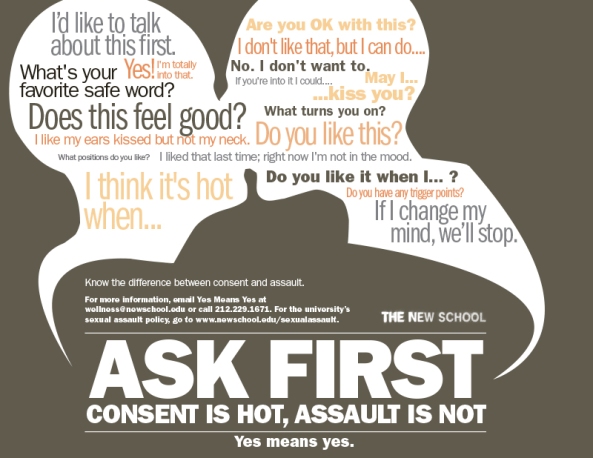 No discussion of harm reduction can stay on drugs forever. While we’ll continue our cavalcade of questionable substances next week, I wanted to take a quick break to chat about something that goes hand in hand with intoxication: Consent.

As we saw in the Burning Man crime reports, Black Rock City has made stunning progress on this front. More so, I believe, than any other festival or large scale music event in the world. Going from 13 to zero sexual assault arrests in 2 years should be congratulated, especially with what happened in 2012. While it’s possible that sexual assaults occurred that were not reported, that would have been true in the years with high arrest numbers as well.  To that end, it’s important to recognize when efforts are being made & good things are happening, and this is a good thing.

Consent violations, big or small, are some of the most unacceptable & problematic experiences that occur in adult environments, especially when assumed participation in radical self-reliance, potent internal & social pressures and controlled substances are present. There are a couple of different kinds of consent, so I figured just in case anyone needed a refresher, I’d go over them really quickly.

Express consent is probably what you’re thinking of when someone uses the word “consent.” It’s usually given in some confirming way, whether it’s verbal/written, or non-verbal, through hand gestures or head nods. This is not something that can be given while rolling face, tripping or drunk off your ass. This is a type of consent that’s also “ongoing.” To explain, just because someone consented to getting to 2nd base, that doesn’t mean they give consent to go any further. There’s a related, modern type  of consent that’s being used that I support heavily, called Affirmative consent. This is also known as getting an “Enthusiastic Yes” as opposed to just waiting for a no.  Consistent checking can create a comfortable & consensual crib, yo.

Implied consent is just what it sounds like. Even Wikipedia describes it as

“a controversial form of consent which is not expressly granted by a person, but rather inferred from a person’s actions and the facts and circumstances of a particular situation”

As you can imagine, this shit does not hold up at universities or in court. So, just because you think it’s been given, don’t assume. Make sure, as the absence of no doesn’t necessarily mean yes. In more clinical or formal settings, Informed Consent is used. For example, if you join a medical study, you usually sign an Informed Consent form, which details the nature of the study and any risks/rewards of participating. Informed Consent is required in environments where Express consent would not be enough. Additionally, a conversation about the study should be had before the form is given to you. Don’t just sign something if you haven’t read it. I know, none of us read the iTunes terms of service either, but this one’s important, especially if you’re in a medical or legal environment.

Finally, Unanimous consent is something you may find a little more often in groups of people who take drugs, or in other cases, poly relationship systems. There are times where consent isn’t a negotiated one-on-one thing. If you & your campmates want to get blasted on Tuesday night, sometimes it won’t happen unless everyone decides to do it. That’s a good way to think of Unanimous consent. Additionally, in sexual activities that have more than 2 people in them, or relationships that aren’t simply monogamous, sometimes unanimous consent is required before something can happen. This is a much more complex form of consent, as any one person can break it down and bring the negotiating process to a halt. There is a lot of empathy and understanding required here, because attempting to seek a “compromise” can be seen as pressuring and inherently inappropriate. Making  sure the least comfortable person feels they’re being heard is a great place to start. There’s some more information about consent violation, especially in the kink world here. For a giant resource center focused on Sexual consent violation, head here.

There’s a lot more here, so definitely hit up the 11th Principle. They’ve worked hard to make consent a visible part of the Burn. Say hi, like their page & tell them Terry Gotham and Burners.me sent you.

25 comments on “Consent: Touching, Hugging & Progress On The Playa”